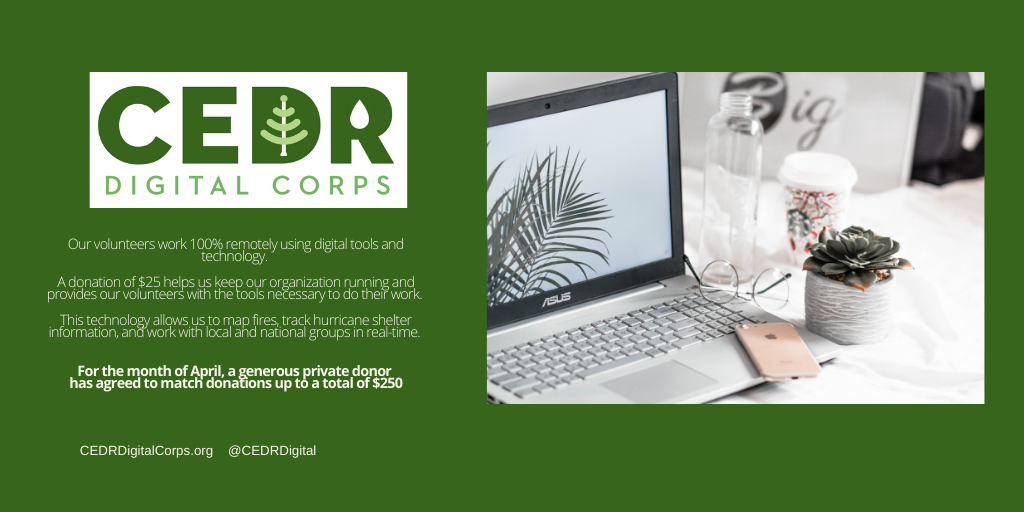 When did you get involved with CEDR?

Early 2018 as CEDR was emerging from the CRHQ work that came before it.

I became interested in “digital disaster response” during the 2017 hurricane season and was a co-founder of Florida Search and Rescue (FLSAR) after working with Mike McGill and Amy Couts on Irma and Maria response. (More on FLSAR and my experience there in this article I wrote & my friend Ed at HotAir.com kindly published).

When the CRHQ team decided to form what would become CEDR, they put out an invitation to folks who *hadn’t* worked with CRHQ but might be interested in joining CEDR’s core team. As much as I enjoyed working with Mike & Amy and the FLSAR team, they focused on FL and I’m in CA, and CEDR’s overall focus was more aligned with my interests, so I interviewed with the recruiting team, they thought I’d be a good fit, and the rest is history…

What are your activities and what do they involve?

My title is “Vice President – Incident Response & Technology Innovation” (or something like that) and as that somewhat wordy label implies, I wear several hats at CEDR.

With my “incident response” leadership hat, I help coordinate CEDR’s activities during specific incidents (what we call “activations”). In between activations, I focus on developing and improving our processes and procedures so we most effectively leverage the work of our volunteers and the tools & technology we have available.

The “technology innovation” part is my work looking at new tools and technologies and brainstorming / thinking creatively about how they might be applied to improve disaster response generally, and CEDR’s work specifically. So as a recent example, CEDR’s animated videos of wildfires are an idea I came up with about using Google Earth Studio (GES), and were a result of me experimenting with GES and thinking “I wonder if we could show wildfires in a new and interesting way using this?” (spoiler: the answer is yes!).

What motivates you to stay involved?

Knowing that we’re actually making a difference and helping people when they need it most during disasters. And knowing that we’re “helping the helpers” — that part of CEDR’s work that provides better situational awareness or other information that first responders and state/local/federal emergency management agencies use to accomplish their missions.

The positive feedback we get from emergency management professionals and our colleagues at other organizations also means a lot. When CEDR gets praise or recognition from people I respect and admire for their own work, that’s a big clue to me that we’re doing something right.

Of what contribution or achievement are you most proud?

I don’t know if this has had the most impact of anything I or CEDR has done, but I’m proud that CEDR as a group, and I personally (I hope) provide an example of the idea that “normal” people — who may not have any prior experience — can make valuable contributions that actually help people on the ground during disasters.

For me, it’s often via technology: I’ve found ways to use my background and understanding of software and information technology to solve problems in disaster response with CEDR in ways nobody has ever tried before. But the idea isn’t just about technology: everyone has their own set of skills and experience they can bring to bear on the challenges of disaster response and sometimes make a real difference.

I try to ‘evangelize’ that idea wherever and to whoever I can (including in this LinkedIn post I wrote at the very start of my ‘digital disaster response’ career).

In your opinion, what is the most important work that this organization does?

I think our work in crowdsourcing shelter information during major disasters like hurricanes has been extremely important and made a real difference in a lot of ways. We’ve made a direct impact by providing that common view of shelters which people who need shelter information actually use during disasters. And perhaps even more importantly, we’ve “led by example” and showed official agencies and other organizations involved with emergency shelters that the challenge of maintaining a truly accurate and complete shelter map across jurisdictions is solvable, and that it’s possible to do better than the current state of existing official systems.

What do you do when you aren’t working and volunteering?

I have three wonderful young boys of grade school age, so any time that I’m not focused on CEDR efforts, it’s a pretty safe bet I’m enjoying time with them!